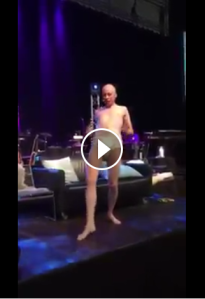 Please watch this video, before you continue reading.

I apologize. I realize you can never get back the 53 seconds you just lost. But I’m certain filling your mind with the Word of God, a good YouTube sermon, or Christ-centered worship music will go far to erase the grotesque visual from your mind.

And what was it, exactly? What was it that you just saw.

What you just saw was the warm-up entertainment (called “evening gymnastics”) before the evening session of a “church” conference. The “church”: Imi Kirken–the most influential church in the Stavanger area of Norway, if not in the entire country.

According to Imi Kirken’s webpage for the conference (rough translation from Norwegian):

“Long have we in IMI Church dreamed of starting a summer festival for all who want to be part of the church life. Our vision has been to hold together a strong focus on seeking God’s presence and see His kingdom swoop among us, combined with a clear focus on living mission that people and churches. The festival will build on the Open Sky concept, a conference that is held every September and January in IMI Church.”

The man in the video is Rune Bødealen. He is a member of Imi Kirken, and his father is a leader in the church. Rune’s mission: to warm up the crowd before the first speaker took the stage.

The speaker who followed Diaper Man was Leif Hetland. Hetland, who boast of over one million souls saved through “his work,” is good friends with Bill Johnson, leader of Bethel Redding. Bill Johnson wrote the foreword for Hetland’s new and heretical book, “Seeing Through Heaven’s Eyes.”

We know Imi Kirken will not condemn Rune Bødealen’s wicked and blasphemous behavior–his diaper dance with a cross in the background. After all, Imi Kirken sanctioned it. But will we see any condemnation coming from Bethel Redding? Will we see Bill Johnson, Beni Johnson, Kris Vallotton, or any of the other “leaders”–men and women that the Bethel Redding members are taught to honor–condemn such depraved and profane behavior?

I believe some of them will see this post. I’m not flattering myself. I know the leaders of Bethel (and/or their subordinates) monitor this and other blogs/sites that warn people about the signs and wonders cult that is Bethel Redding.

People need to know that Diaper Man and other ungodly characters and their blasphemous antics are readily accepted and promoted within Bethel Redding and this demonic group’s sphere of influence.

This entry was posted in General Info. Bookmark the permalink.